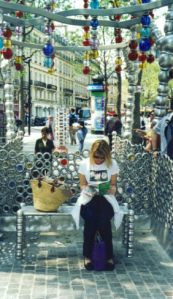 International writer, editor and television producer Carole Dixon is most happy traveling the globe documenting her cultural and culinary adventures in major cities. More far-flung travels have led from a Maasai village in East Africa to the backwaters of Kerala, India. Her stories have appeared in Town & Country, Departures, Elite Traveler, USA Today, The Evening Standard in London, Business Traveler, C, Angeleno, DineLA Jetsetter, Jetset Magazine and Travel Age West – among others.  Her second book, the Wallpaper City Guide to Los Angeles was published in the spring of 2011 by Phaidon. Dixon was the food editor of The Feast for NBC LA, which after two years merged with DailyCandy.com. Currently, she is the editor and co-founder of West Hollywood Lifestyle Magazine and The CaratDiet.com as well as a regular contributor to BravoTV.com, AFAR, Wallpaper, Robb Report and The Hollywood Reporter among other publications, websites and brands.

One response to “About”